Hello Everyone, in this post we will look into the Minimum Wages in India, the types of labour, industries, exclusions as well as penalties.

In this post we cover the topics as mentioned below:

What is the Minimum Wages Act?

This is an Act of Parliament concerning Indian labour law that sets the minimum wages which must be paid to skilled and unskilled labours.

When India introduced this act in 1948, it gave both the Central Government and State Government higher authority to fix wages.

Thus, this act became legally non-binding but statutory. If the payment of wages to a worker is below the accepted minimum wage rate, then it is termed as forced labour.

A fair wage is a level of wage that not just maintains a level of employment but also seeks to increase it keeping in mind the industry’s capacity to pay.

The concept of a minimum wage gives a guarantee of basic livelihood and preserves efficiency. It also provides for the education, medical requirements and some level of comfort to the worker.

The one who does simple duties, which only requires little or no previous experience. It is necessary to have familiarity with the working environment.

His work thus may require in addition to physical exertion familiarity with a variety of articles or goods.

A semiskilled worker has a defined routine nature where he does not need much of the judgment, skill and but for the proper discharge of duties given to him.

The important decisions are generally made by others. His work is limited to the performance of routine operations of limited scope.

A skilled employee is capable of working efficiently of practicing independent judgment and doing his duties responsibly.

He must have a thorough knowledge of the trade, craft or industry in which he is employed. 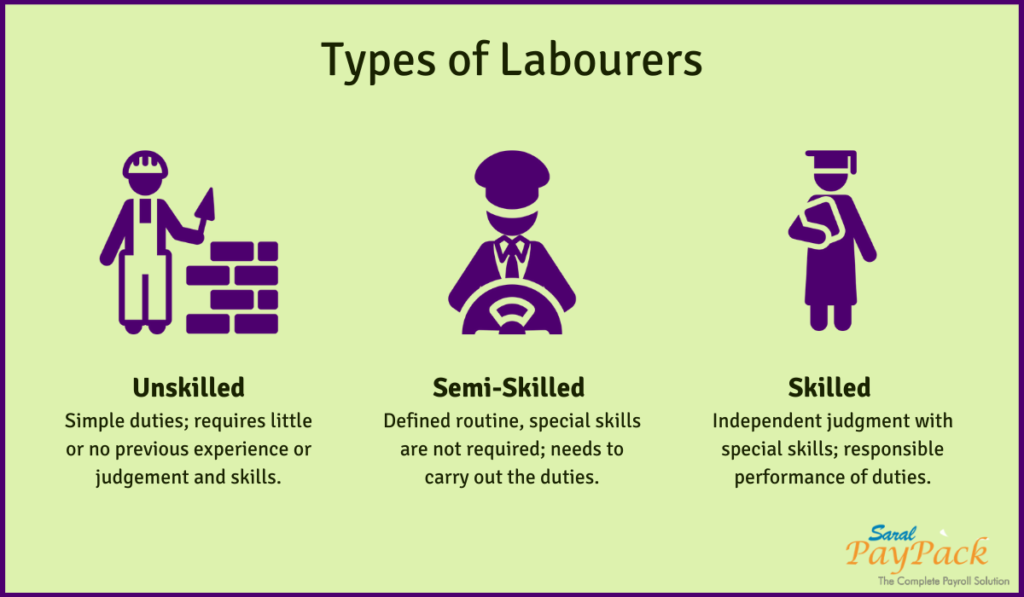 The rate of wages within the scheduled employments is different across states, sectors, skills, regions, and occupations as a result of the distinction in cost of living, regional industries capability to pay, consumption patterns, etc.

Hence, there is no single uniform minimum wage rate across the country and the structure has now become very complex.

Now let us look into the State of Karnataka – Chemical Industry (Zone-1) for example:

Violation of the Minimum Wages Act like on the working hours and others come under the Central Act get a penalty of five years of imprisonment and Rs. 10,000 fine under section Act 22.

Any agreement whereby an employee reduces his right under this act shall be null and void.

You can also see our related blogs:

We have come to the end of this post on Minimum wages in India. Let us know your views and opinions in the comment section below.